Voters In This Caribbean Country Are Electing A New Government Today 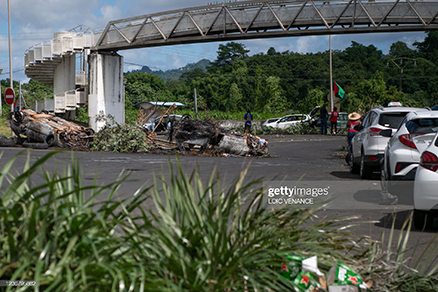 Martinique Under Curfew After Looting

2 months ago·1 min read
ShareTweetPinShare
Home
Caribbean News
Martinique Under Curfew After Looting
The content originally appeared on: News Americas Now
A burnt car at a road blockade in Le Lamentin, on the French Caribbean island of Martinique, on November 25, 2021, during a general strike called by unions to protest against measures to curb the spread of Covid-19, and labour and social issues. (Photo by LOIC VENANCE/AFP via Getty Images)

PARIS, France, Fri. Nov 26, 2021 (Reuters) – Authorities on the Caribbean island of Martinique ordered a curfew on Thursday after protesters looted shops and set up burning barricades as demonstrations against COVID-19 protocols spread across France’s overseas’ territories.

Martinique and neighboring Guadeloupe have been hit by violent unrest over the last week after the government imposed tougher measures to curb the spread of the pandemic.

Compulsory vaccination for health workers, a measure already introduced in the rest of France, has added to a sentiment among the majority Black population of being excluded and marginalized from the mainland. Protesters are also now calling for salary hikes and lower energy prices.

Some have called the mandate a throwback to the slavery era, insisting they should be allowed to make their own choices about health treatment.

In Guadeloupe, where protests began last week, there is a historic mistrust of the government’s handling of health crises after many people were systematically exposed to toxic pesticides used in banana plantations in the 1970s.

Local media showed videos on Wednesday night of protesters targeting a shopping center and running away with goods, as well as images of demonstrators setting up burning barricades on roads.

“The police force was mobilised all night to restore order, and needed to use force to stop the violence and vandalism,” Martinique Police Chief Stanislas Cazelles said in a statement, adding that 11 people had been arrested and weapons seized.

Vaccination rates in France’s overseas territories, which include islands in the Caribbean, Indian Ocean and the Pacific, are far lower than the mainland. That has led to prolonged and tougher COVID-19 restrictions, resulting in unrest.

A new wave of coronavirus infections is spreading across the Caribbean islands, causing lockdowns, flight cancellations and overwhelming hospitals, just as tourism, a lifeblood of the local economy, was beginning to show signs of recovery.